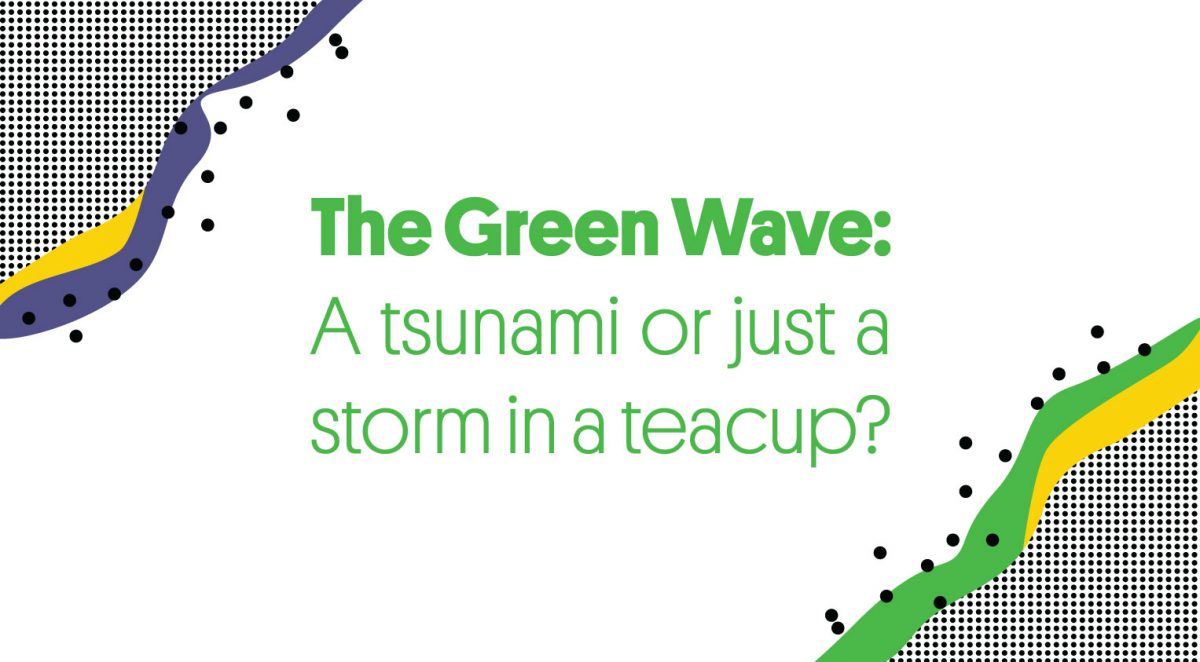 In the summer of 2017, support for the Greens stood at a historic low in Europe. At the time, Europe Elects projected just 23 out of 705 seats for Greens/EFA. If a European election had been held back then, it would have meant the end of a Green and progressive regionalist group in the European Parliament, as the legal requirement to form a group is at least 25 MEPs from at least seven member states. The lamentable state of the Greens was not just visible in hypothetical polls: in Austria, GRÜNE failed to enter the national parliament on 15 October 2017 for the first time since 1983. The French Europe Ecology – The Greens (EELV) – dropped to just 4% of the vote share in the national parliamentary election and withdrew their candidate from the Presidential race before the first round. In Germany, GRÜNE were unable to profit from 12 consecutive years in opposition in the national elections. The situation for the Greens seemed catastrophic. But from this vale of tears in 2017, the Greens/EFA have steadily risen in the polls across the continent. Two weeks ahead of the elections, Europe Elects projected 60 seats for Greens/EFA. In the following week, the Europe Elects projection showed that Greens/EFA had secured another nine seats. The trend heralded the shift of votes to the Greens in the run-up to the elections, in which they received three times what they were projected to get in summer 2017.

How come the Greens were able to improve their standing from an extremely low level to a record high? An academic in-depth analysis on this topic has not yet been published and voting behaviour is a complex process, which can be explained with socio-structural, socio-psychological and rational choice approaches. The Standard Eurobarometer 90 provides us with some initial ideas as to why Europeans voted so green in this election. At the beginning of 2017, only 8% of EU voters named climate change as one of the two top priority issues the EU was facing. This share doubled to the historic high of 16% in November 2018. At the same time, terrorism was perceived as less of a threat. In 2017, 44% of EU citizens named the fight against terrorism as a first or second top priority for the EU. This share dropped to just 20% in late 2018. Polls at the national level support the findings from the Eurobarometer study and indicate that public attention has continued to shift towards the topic of climate change. According to the pollsters Infratest dimap, Research Affairs, and Opinium Way, environmental and climate issues topped the list of most important issues in Germany, France and Austria just ahead of the EU elections. Moreover, national polls associate a high level of climate competence with the Greens in many member states. It is important to note at this point that fear has been identified as motivation in voting behaviour. It can be argued that the fear around climate change and, even more so, the decline in fear around terrorism and migration could have triggered voters to vote less for anti-immigration parties and more for the Greens.

Greens/EFA can also be interpreted as a statement ‘against’ other parties. It is no secret that a widespread fatigue exists with the traditional centre-left and centre-right parties in many EU countries, such as France, Germany or the Netherlands. In an increasingly fragmented party system, the Greens present themselves as a centrist and innovative alternative to these parties. Moreover, the Greens are perceived as an antidote to the right-wing anti-immigration and Eurosceptic parties. Unlike a significant number of centre-left S&D, liberal ALDE and centre-right EPP parties, the Greens are perceived as resisting the adoption of policies against non-European immigration. For voters who are primarily voting against the rise of right-wing illiberal policymaking, they have proven a reliable alternative. While these perceptions in and the awareness of the electorate about climate change or the illiberalism of other parties certainly helped the Greens during the EU elections, it needs to be considered that their success is fragile.  As soon as other topics dominate the public discourse and voters’ consciousness, the Greens are likely to drop back to lower levels.

As mentioned before, the Green wave did not hit all shores equally. Within the European electorate, significant differences in support for the Greens/EFA are visible, backing up the speculation about the origins of the Green wave referred to above. The Standard Eurobarometer 90 shows that climate change became especially important for EU citizens living in Northern, Western and Central Western European countries. In these countries, the Greens performed particularly well. In Eastern and Southern Europe, immigration, economic recovery and social justice remain dominant topics, which did not leave much room for traditional Green issues to be presented in the media and in the public discourse. This divide in the European public sphere is reflected in the election results. An exclusive Europe Elects analysis for this article shows that the Greens/EFA vote share among voters in countries which joined the European Union in 2004 or later stands at 2.2%, whereas the vote share in the older member states is 13.8%. In countries where climate change was deemed more important than terrorism by the voters, Greens/EFA even reached 20.0% on average.

The Greens/EFA powerhouse is without doubt Germany. Around one third of all Greens/EFA voters and seats in the European Parliament come from the land of Wurst and Volkswagen. Germany also boasts the highest share for a Green party in the EU, with GRÜNE achieving 20.5% of the vote share. If Greens/EFA parties are aggregated, Luxembourg tops the list with 29% for Greens, Pirates, and Volt Europa combined. In all Benelux countries, Austria, the Nordic countries, Lithuania and the British Isles, Greens/EFA results come in at between 10 and 20 percent. On the Iberian peninsula and in Latvia, the Greens/EFA group polled at just above 5%. In all other countries, in a stark contrast to the first group of member states listed, the Greens/EFA parties are almost irrelevant or non-existent. While the Greens appeal to a strong voter base in wealthier European countries, they fail to mobilise voters in South Eastern, Southern and Central Eastern Europe.

In general, the Greens across the European Union tend to perform well in urban cores. The stark difference can be seen in cities like Berlin: GRÜNE achieved more than 50% of the votes in some wards in central Berlin. Just outside the German capital, in multiple villages on the Berlin-Brandenburg border, this vote share drops below the European average of 12 percent of the vote. This pattern is repeated across most of Western and Central Western Europe: in Bristol and Brighton in the United Kingdom, the Greens achieved more than 30 percent of the vote. However, in more remote parts of the country, like Northumberland or Copeland on the English-Scottish border, the Green vote share drops to just 7 percent. In Eastern Paris, the French Greens (EELV) became the strongest party, with between 20 and 30 percent of the vote. But again, just a few kilometres outside Paris and in most rural areas in France, less than 10% of voters supported EELV.

Stark differences in voting behaviour also exist between different age groups. An estimation by Europe Elects based on exit polls and polls representing 85% of the EU electorate shows that around 19% of EU voters aged 18 to 25 voted for the Greens/EFA. But only 15% of those aged around 30 voted Greens/EFA, 14% of those aged 40, 13% of 50-year-olds, 12% of 60-year-olds and just 8% of people aged around 70.

Green parties also enjoyed stronger support from women than from men. In Austria, the SORA exit poll shows that only 11% of male voters voted GRÜNE, while the share rises to 16% among female voters. This gender gap is also visible in the RED C exit poll for Ireland (11-21% vs. 14-24%), the ELABE exit poll for France (11% vs. 14%) and the Forschungsgruppe Wahlen exit poll  in Germany (18% vs. 24%).

The few data available on the subject show that the Green parties are also stronger among university graduates, while they perform less well among voters without university degrees. For example, the SORA exit poll shows that 30 percent of university graduates voted Green in the European elections in Austria, compared to just 4% among voters who specified an apprenticeship as their highest qualification level. The Forschungsgruppe Wahlen exit poll for Germany and the Ipsos exit poll for France show similar trends.

The data show that the Greens are stronger among voters with a high income. The RED C exit poll for the European elections in Ireland shows between 17% and 27% for the wealthiest voters, while the share among poorer rural voters is 0 in some regions. One in five high-income professionals in France voted Green in the election, but only 7% of blue-collar workers followed their managers’ lead.

Data for other countries, also from previous polls and elections, underline the image of the EU Green voter: she – rather than he – has a high income and a high education level and lives in the urban centres of Western, Central Western or Northern Europe. Copenhagen, Amsterdam, Berlin, Freiburg, Hamburg and Brussels were the epicentres of a Green tsunami in the 2019 European elections. Far from this Green electoral epicentre – in the rural parts of Eastern Europe – the environmentalists are much weaker. Particularly among older male low-income voters in these areas, the Green wave is nothing more than a storm in a teacup.

Strength of Greens/EFA per country in EU elections: https://public.flourish.studio/visualisation/370675/