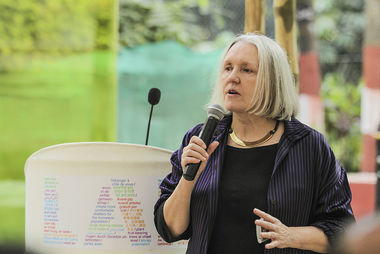 The renowned sociologist Saskia Sassen delivered a lecture in Brussels on Tuesday March 8th, followed by a discussion. The encounter was organised by the Green European Foundation, together with the French and Flemish Belgian Green Foundations, Etopia and Oikos, and cultural NGO Masereelfonds.

Saskia Sassen is professor of Sociology at Columbia University in New York. She is an expert on transnational migrations flows and a reference on globalisation. Her books have been translated into 12 languages and she is a member of the Club of Rome. Her criticism of growing inequality has earned her the label of the female “Piketty”.

The discussion was introduced by Gie Goris (Mo Magazine), with the participation of two special guests: Isabelle Ferreras (Sociologist at UCL, researcher at FRNRS, associate at “the labor and worklife program” of Harvard Law School) and Florent Marcellesi (Spokesperson for the Spanish Greens in the European Parliament, member of the European Parliament as of next October, and expert in international cooperation). The lecture was held in English, with translation to French and Flemish.

Sassen’s most recent book, “Expulsions: Brutality and Complexity in the Global Economy” describes how capitalism has entered a new phase that is increasingly brutal, even for those who may previously have felt shielded. The usual concepts of injustice and poverty are no longer sufficient to explain the current dislocation, both socio-economic and ecological, which is translated by a sharp rise in inequalities and unemployment, an increasing number of people in incarceration, as well as the accelerated destruction of land and water reserves. The time has come to recognise these tendencies as exclusions, or even as expulsions: from one’s livelihood, one’s home and even from the biosphere which renders life possible.

What Sassen attempted to demonstrate is the complexity generated by the combination of knowledge or technologies, used within the financial sphere as well as towards the destruction of the environment. This complexity contributes to an obscuring of the responsibilities in this situation.