In the fifth year of the comprehensive crisis we are facing, social questions have come to the top of the political agenda and the public debate in Europe. This Green European Foundation publication, initiated by Zielony Instytut and the Heinrich-Böll-Stiftung Warsaw office, links the European level social policy goals to a concrete national example: Poland. 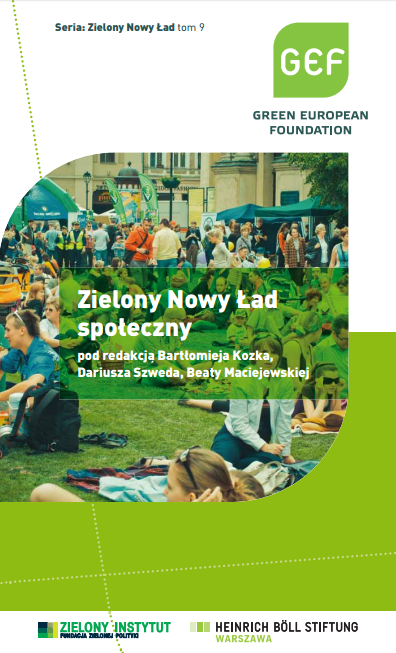 The crisis, as well as the proposed mainstream solutions which focus on fiscal austerity exclusively, don’t come without a social cost. This is illustrated by numbers, such as 50% youth unemployment in Spain; the cost of third level education, rising by 127% in Ireland; or a horizontal 15% pensions’ cut in Romania. Notwithstanding Greece, where consecutive adjustment packages to tackle the budgetary imbalances resulted in an increase in the already high numbers of people living below the poverty line and brought about a situation of imminent collapse of basic social infrastructure, such as health care. Over the last years, we have seen unemployment and social inequality on the rise in Europe, while the standards of the European model of social protection, labour law, collective bargaining rights or working conditions have seen frequent set-backs.

In the common market  of the EU, social policy has largely remained a competence of individual Member States, despite the Treaty of Lisbon and the Europe 2020 strategy detailing social policy objectives and concrete goals related to employment and poverty eradication. It is Member States who make the major policy decisions influencing the achievement of these goals. Embedded in this context, Zielony Instytut and the Heinrich-Böll-Stiftung Warsaw office initiated this Green European Foundation publication, attempting to link the European level trends, discussions and social policy goals to a concrete national example: Poland.

In Poland, the developments in social policy seem largely unaffected by the crisis. As the European Trade Union Institute in its Policy Brief 2/2012 points out, “The crisis is essentially perceived and described as resulting from external factors, and in itself there exists no reason, therefore, to call into question existing national social arrangements.” Nevertheless, Poland has also seen a significant rise in economic inequalities in the last years, with a widening gap between those being able to harvest the benefits of Poland’s steady economic growth and the growing numbers of people who are left behind and feel the fruits of transformation are not available to them. This stratification of Polish society has effects in the radicalisation of the political scene, as we witnessed during the “Independence March” on November 11, 2012. The fierce political debate over the Polish pension reform (raising retirement age to 67 years) is another example of tensions in society. The hundreds of thousands of young people who already live abroad or are considering leaving the country cannot be seen as a sustainable solution for unemployment among the young generation in Poland.  The growing number of immigrants in Poland requires better access to the social system and integration programs, in order to create an open society of equal chances.

These are among the key topics this publication tackles in an attempt to give answers to what a Green social model for Europe could be: a model that preserves 20th century achievements, but sets out to innovate for the 21st century.

We have translated two of the contributions to this publication (“Social Policy – An Introduction” by Ryszard Szarfenberg and “Social Policy – Green debates” by Bartłomiej Kozek) in English, as well. You can download these below, alongside the publication in Polish.

A Third Sector in Welfare