In which fields is investment needed in order to drive forward green economic remodelling and generate sustainable growth? How should the financial system be organised in order to release enough capital for ecological innovations and investments? The articles that make up this publication by the Green European Foundation and the Heinrich Böll Foundation attempt to answer the above questions from various perspectives: from the financial sector to the Green political environment. 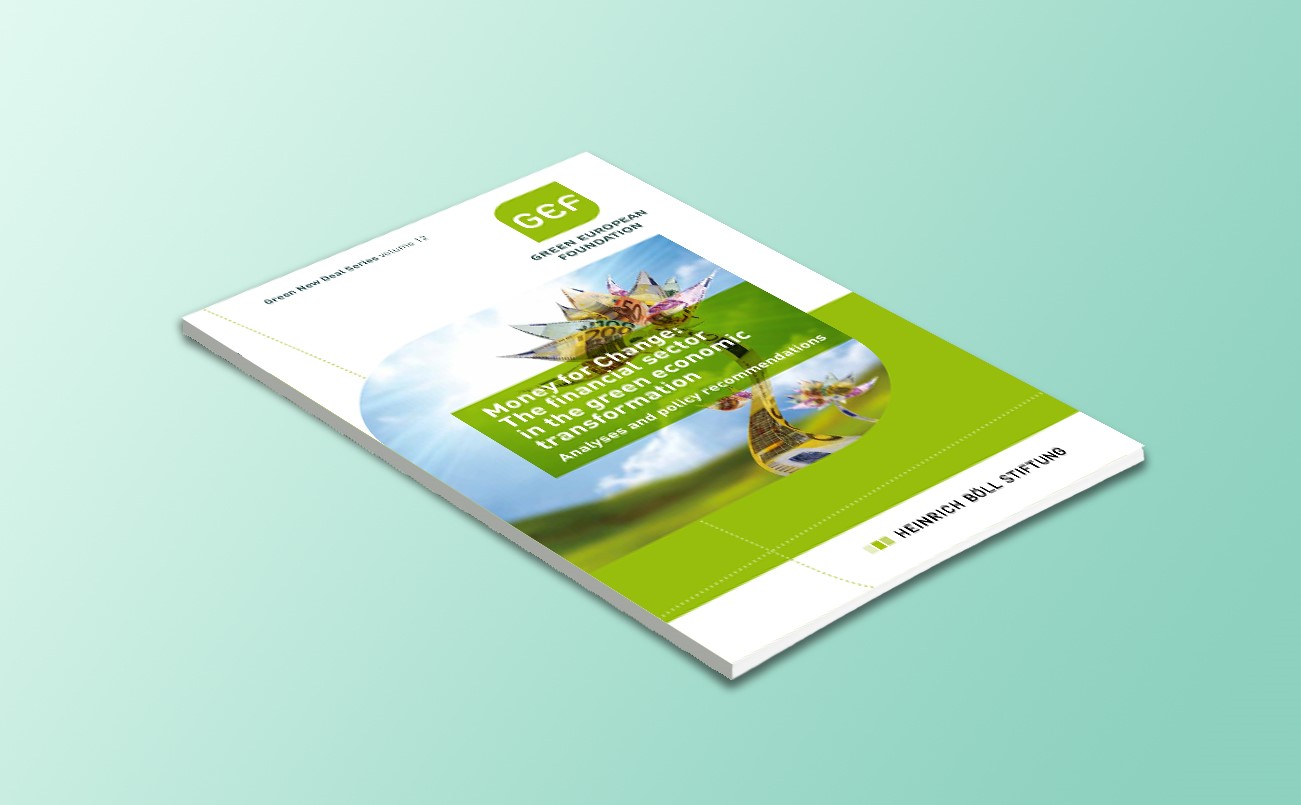 Six years after the global financial, economic and debt crisis, Europe is still struggling with the consequences and trying to improve its economic situation. The relatively good position of the Federal Republic of Germany is the exception in a generally crisis-ridden environment. The devastating effects of the financial crisis of 2008 -2009 and the recession that followed have yet to be fully overcome. The aggressive monetary policy of the European Central Bank may have relieved the financial crisis but it has not boosted the real economy. The risks of deflation are now being discussed in view of the policy of low interest rates followed by the ECB.

At the same time, we are faced with the challenge of hastening the convergence of economics and ecology. Climate change and the crisis facing the world’s ecology demand an urgent shift away from an economic system that is based on the ruthless exploitation of natural resources. The European Union cannot resolve its financial and social crisis without economic growth. However, the old economic model is not viable for the future because it leads us deeper into crisis. The way out of this dilemma is a new, sustainable model for growth based on renewable energy, a high degree of resource efficiency and re-utilisation of valuable raw materials. This is, in fact, a green industrial revolution – no more, no less – which will dramatically reduce depletion of the environment and also lead to a new boom in green technologies, products and jobs. This requires innovation and investment on a large scale.

Concepts for an ecological orientation to European economic and financial policies were the focus of a conference held in Berlin at the beginning of May 2014 and organised by the Heinrich Böll Foundation, the Green European Foundation and the German Trade Union Federation (DGB). The key question was how to finance extensive modernisation of the economy in Europe according to ecological considerations. This requires re-regulation of the financial sector, which would lead to greater alignment with the real economy, and would offer sustained investment opportunities for private investors.

Europe has the opportunity to make ecological re-orientation the springboard for new creation of value. This requires steering capital flow that is searching for investment opportunities into areas suitable for investment. Solutions that satisfy these criteria are sustainable in two ways: from an ecological point of view, and from the point of view of a stable financial and economic system.

Key contributions to the publication

This publication is a collection of articles from participants at this conference as well as from other authors. In his introductory article, Gerhard Schick illustrates the connection between a greater focus of the financial world on the real economy and financing a green transformation; he then names the most important areas to promote green investment. Simon Wolf then raises the question of whether we need a policy for the financial sector even more than before, in view of the investment required for this green transformation, or whether green investments would flow automatically if we improved the general conditions for ecological economic activity.

The next four contributions primarily address the problems of financing the real economy in Europe. Thierry Philipponnat warns against a hasty reversion to more capital market financing as a response to a lack of bank lending; instead, the banking sector should be geared more towards the needs of the real economy. Andreas Botsch sees the main problem as being the paradox of savings and the drop in investment rates, and proposes the formation of a private equity fund that could be used to finance this ecological transformation. Benoît Lallemand explains why breaking up the large banks would have a positive effect on financing opportunities for both small and large companies and why the resulting financial system would also favour ecological projects. For Reinhard Bütikofer, the decisive key factor for economic recovery in Europe lies in a renaissance and eco-orientation of industry and he investigates financing opportunities beyond the banking sector.

The remaining articles discuss how to encourage green investment. In his interview, Karsten Löffler advocates green mainstreaming in the financial sector instead of promoting individual projects. Stanislas Dupré and Jakob Thomä identify three promising initiatives to dismantle the obstacles in the financial sector to reducing the carbon footprint of the economy. Mehrdad Payandeh explains his proposal for a European Marshall Plan which combines public investment and private investment to secure ecological modernisation. Ana Belén Sánchez analyses the current status of ecological transformation in Spain and the challenges of how to finance it. The contributions of Claudia Kemfert and Dorothea Schäfer, as well as Silvia Kreibiehl and Ulf Moslener, use the example of the energy transition in Germany to examine the question of how more private capital, especially from large institutional investors, can drive the transition of energy systems. Finally, Philippe Lamberts takes a look at the previous and future role of the European Parliament in promoting a green transformation.