Following on the ongoing tragic events in Fukushima, Japan, the debate around nuclear power has been reignited. The Heinrich Böll Stiftung foundation has put together a series of reports in the following publication which examine some of the common myths around the use of atomic energy. The Green European Foundation is actively engaged in disseminating the project at the European level. 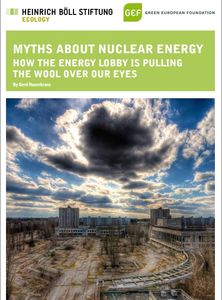 The publication highlights several common misconceptions regarding nuclear energy. One such misconception emphasises that supporting nuclear energy does not set back the development and spread of renewable energy sources, and that nuclear power plants can be a “bridge” between dirty and clean energy systems. This misconception has resulted in increased government investments throughout the world in improving and building new nuclear power plants rather than concentrating on safe, clean and not so costly renewable energy, as well as on promoting and investing in increased energy efficiency.

The publications below examine these issues in a forthright manner, and outline the reasons why atomic energy does not constitute a real solution to our energy problems.

The Green European Foundation has translated one of the studies, “Systems for change: Nuclear Power vs Energy Efficiency and Renewables” into Italian to facilitate the debate on the topic in more parts of Europe.

The Economics of Nuclear Power: An Update 1.18 MB 19 downloads

Nuclear Proliferation: A Civilian and a Military Dilemma 1.45 MB 16 downloads