The Energy Atlas tells the story of Europe’s energy transition. It is a story of a past where Europe was supplied largely by a small number of big energy companies, and of a future, which lies increasingly in the hands of cities and municipalities, and millions of ordinary energy citizens across Europe. 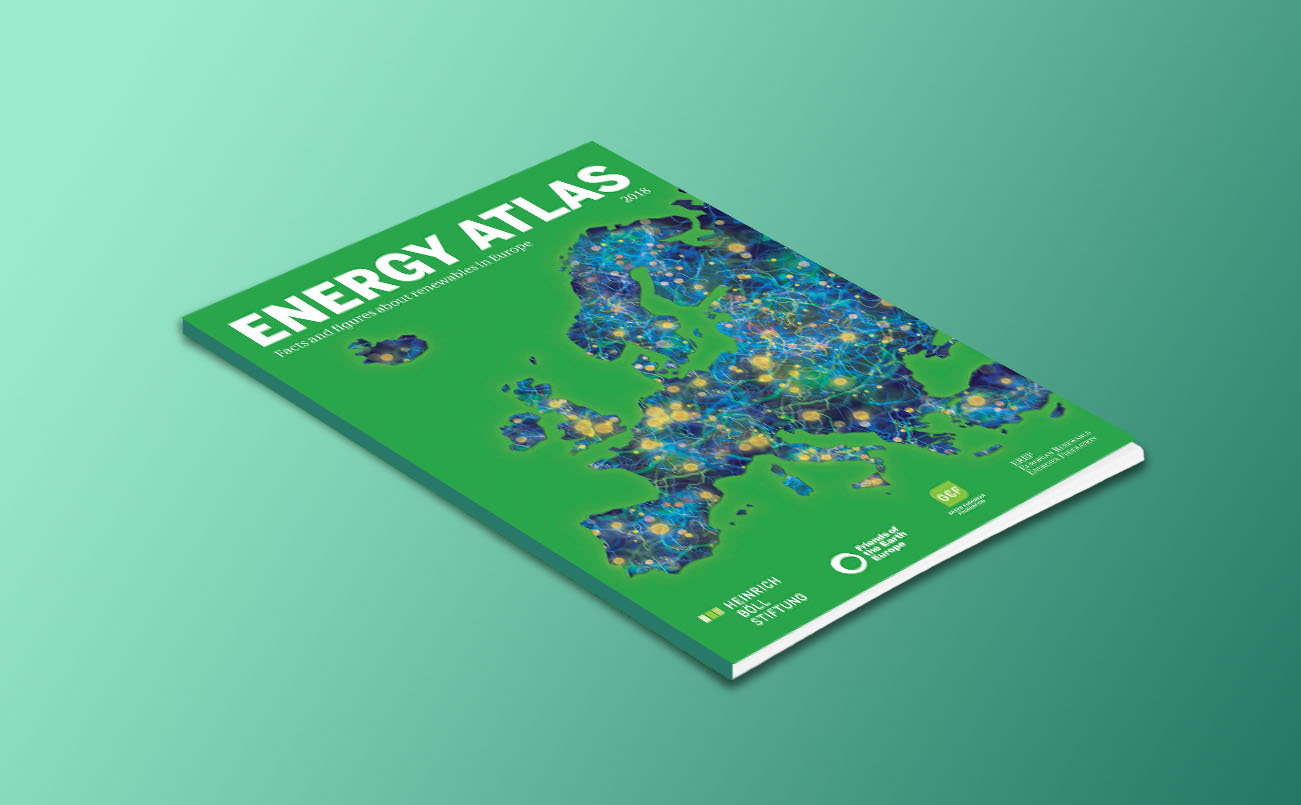 The energy transition is already well underway. However, it is happening at different speeds across the continent. For the past 100 years, geopolitical strength has depended on access to fossil fuel resources. With the support schemes for renewable energy and the rise of citizen energy, the energy system is taking a new course towards greater democratization and decentralization.

With the Paris climate agreement, Europe is facing the global responsibility to keep global warming within 1.5°C. Renewable capacity in the EU has increased by 71 percent between 2005 and 2015, contributing to sustainable development and more local jobs. In the most advanced countries and regions in Europe it is often the local government and citizens who are driving the transition. At the time of publication of this Atlas, the EU’s next generation of energy legislation is in the process of being finalised. The targets and regulations agreed to take effect by 2030 will shape Europe’s energy system for the next decade – one of the last critical chances to take sufficient action to avoid catastrophic climate change.

Cooperation on the European level is key to ensuring the right conditions for switching to renewables. Back in 2010, several countries in the Union were already on their way towards integrating large amounts of renewable energies into their systems. They also pushed for stable and reliable frameworks at EU level, as well as ambitious binding targets.

We can already tell that the EU’s 2030 ‘Clean Energy package’ sets out roughly the right direction for the path towards renewables, but it fails to ensure the speed and depth of the transition. The proposed renewable energy and energy efficiency targets are far too modest, particularly given the falling technology costs and availability of new renewables technologies, thus jeopardising the progress achieved in previous years. The EU energy framework needs to be better aligned with its long-term climate commitments.

The next big challenges in Europe’s energy transition are the heating and transport sectors. So far, renewable technologies have not penetrated the transport, heating and cooling systems as much as they have the electricity system. In transport, we are beginning to see a shift to electrified transport and electric vehicles – driven by fast-advancing storage and battery technology and decreasing cost.

Bringing the heating, cooling and transport sectors together with the power sector – connecting sectors that are currently isolated from one another – will allow Europe to reach a 100 percent renewable system with technology that is already available today. This will enable us to overcome the longstanding renewable energy challenge – that of variable supply. When electrified, the heating, cooling and transport sectors will become large sources of flexible storage that back up the electricity sector. When wind and solar energy is plentiful these sectors can flexibly be used by heating systems and the batteries of electric vehicles, making ‘backup’ nuclear or fossil fuel capacities redundant.

The advantages of renewable energy are clear, especially when they are owned and controlled by communities: cleaner air, warmer homes, industrial benefits. Furthermore, money stays local, more jobs are created, energy poverty is reduced, and most importantly, renewable energy contributes to saving the planet.

With this Atlas, we aim to contribute to an open and facts-based discussion on the European energy transition, whilst advancing this ambitious European project that unites European citizens.