EU energy policy is at a crucial stage, with targets for 2030 being negotiated. The eventual outcome will also be a reflection of the differing energy debates in each Member State. With the Heinrich Böll Stiftung (EU office), we offer an introduction to the current energy debates in France, Poland and the UK. This is part of our joint project, analysing the German energy transition (Energiewende), in its European context. 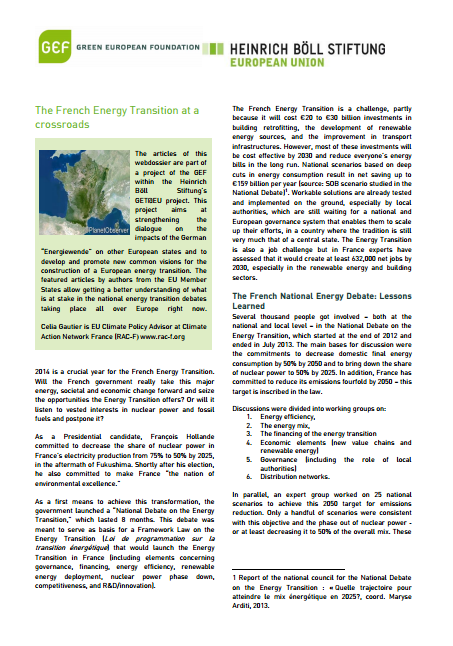 The French government is currently working on plans to reduce France’s reliance on nuclear energy and adopt ambitious CO2 reduction goals. The roadmap for this will be presented in an ambitious energy law, expected to be published later this year. Celia Gautier from Reseau Action Climate France outlines the current debate and highlights some of the challenges faced.

The UK, meanwhile, is facing an uncertain energy future, with efforts by some to impose uncertain CCS (carbon capture and storage) and risky fracking for shale gas in to the country’s energy mix. But what does this mean for its future investment in renewables? Mark Johnson from the European Policy Centre gives an overview of the situation.

Poland is a country in need of a major energy transition, yet the concept of widespread use of green energy is yet to take root. What concrete steps can be taken to change this? Andrzej Kassenberg, co-founder and president of the Institute for Sustainable Development Poland, provides some ideas.

The articles of this web dossier are part of a project of GEF within the Heinrich Böll Stiftung’s GET@EU project. This project aims at strengthening the dialogue on the impacts of the German “Energiewende” on other European states and to develop and promote new common visions for the construction of a European energy transition. Events as part of this project took place in London, Paris, Brussels and Warsaw.

Analysis of the current state of the Polish Energy Policy 215.81 KB 23 downloads