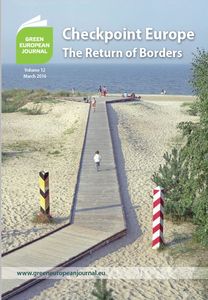 The Green European Journal organised a panel discussion in connection to its latest edition ‘Checkpoint Europe: The Return of Borders’ on Saturday May 21st in the framework of the spring council of the European Green Party.

What do borders mean in today’s Europe? Be it the harrowing images of refugees risking their lives to scale barbed wire fences, or the policing of public spaces in the name of security measures, these dividing lines have a very real impact on the lives of human beings.

Whereas once walls and barriers appeared to be crumbling on the continent, it seems today that the space around us is increasingly being carved up, sometimes very starkly with the return of border controls, other times almost imperceptibly with the creeping entrenchment of cleavages in identity. What does this trend tell us about the Europe we inhabit today? Are new battle lines being drawn?

A panel debate in connection to the latest edition of the Green European Journal, ‘Checkpoint Europe: The Return of Borders’