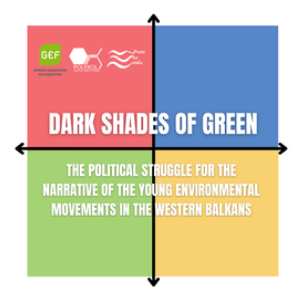 The right-wing has for a long time been associated with climate denial and justifications of industrial pollution. However, this rhetoric seems to be changing, and environmental issues are becoming central to right-wing politics. In the Western Balkans, environmental problems are emerging as a mobilizing factor across different political actors and social movements. Issues that are traditionally claimed by the progressive greens, are now coming into focus of the populist right, opening new fields for reaching and engaging otherwise passive citizens. Driven by the unsustainable re-industrialization, the growth in the construction sector, and new, often foreign investments in mining, fossil fuels, land grabs and destruction of nature, environmental threats are ever more mobilizing the citizens on the anti-establishment wave. Catching sight of the loss of the EU perspective and the increased post-truth crisis during the pandemic conditions, the right wing is not missing their chance. The struggle for nature is often painted with nationalist and traditionalist narratives.

On the other hand, the greens nor the left do not seem to be keeping pace with these developments, appearing unfit to offer credible alternatives to the populist narratives of the local grassroots movements. The environmental civil society initiatives, and the social justice and human rights organizations, are not connected enough, and their knowledge and experiences are atomized. In addition, many actors are insisting that the environment is intrinsically an “apolitical” issue, accusing each other of “hijacking” it. These processes are not only happening in the Western Balkans, however there is an important specific context related to the recent history and genealogy of the green movement. In the context of a blurred EU perspective for the Western Balkans, and in the absence of strong green and left alternatives, will the right wing populism succeed in appropriating the topic of environmental justice? How can the progressive forces be enabled to take the lead in environmental struggles?

The discussion is opening one of the important questions of many about the future of green politics in Europe. We are happy to use this opportunity to present Serbian translations of the publications with extended analysis of political ecology from the greens perspective – the Green European Journal editions: A World Alive: Green Politics in Europe and Beyond and 2049: Open Future.

Balša Lubarda is an environmental sociologist specializing in environmental communication, radicalism, right-wing politics and political ideologies. He is also a Doctoral Fellow and the Head of Ideology Research Unit at the Centre for Analysis of the Radical Right, as well as a member of the Emancipatory Rural Politics Initiative (European branch). His research has been published in peer-reviewed journals such as Environmental Values, Sociologia Ruralis and other non-academic outlets, including New Eastern Europe, Fair Observer, Open Democracy, Undisciplined Environments, Altre Economia etc. Balša has also provided commentary for The BBC Radio 4 and The New York Times.

Damir Zejnulahović is a PhD student of sociology at the Faculty of Philosophy of Belgrade University. He completed his undergraduate studies of sociology at the same faculty, where he took courses in “Culture” and “Politics” modules during his undergraduate studies. He got his Master degree in sociology, at the same faculty, defending his master thesis „Ideological underpinnings of a conservative Srpski pokret Dveri”. The focus of his research interests are political sociology, sociology of knowledge, historical sociology, critique of ideology.

Iva Marković is an environmental activist and researcher in political ecology from Belgrade. Her current focus is on water as a common good and on developing alternative policies for sustainable governing of natural wealth. Her interests are in commons, natural resources management, social impact of climate change, degrowth, just energy transition and ecofeminism. She is involved in organizing left and green actors and networking inside the environmental movement. She is a co-founder of Right to Water (Pravo na vodu) initiative, organization for political ecology Polekol, Women For Environment network, and active in the Save the Blue Heart of Europe campaign against small hydro projects in the Balkans.

This event takes place on Zoom, please register and join via this link.

Simultaneous interpretation Serbian – English will be provided for this event.